Blue Jeans and White T-shirt….there’s a song in there!

It had been six weeks and two days since my last fix. A long six weeks!

Last Tuesday night I boarded the 5:25 train to Glasgow, praying that Boy Child and his friend would catch the train a few stations further up the track. They did! Whew!

We were heading for Glasgow’s art deco O2 Academy to see The Gaslight Anthem in concert.

The boys hadn’t eaten so when we pulled into Glasgow they went off in their separate directions in search of food with strict instructions to meet back under the clock in the station. Boy Child arrived back first with his Burger King bag. No sign of his friend.

Great! We weren’t even out of the station and I’d lost one of them! Teenagers are worse than small children at times.

“Has anyone seen a lost teenager in blue jeans and white t-shirt?”

Boy Child’s phone rattled. The missing wean was in McDonalds more than a block away! I’ve yet to figure out why he went there instead of Burger King but at least he hadn’t reappeared with a loaf of bread.

It is worth pointing out that this “wean” is apparently highly intelligent…..hmmm….

We found him a few minutes later and I watched as he practically juggled his drink and burger box, refusing all offers of assistance, as he attempted to eat his dinner.

By some miracle he managed to consume his meal without wearing any of it. Moral victory!

The walk down to the O2 Academy was  quite pleasant. The weather was warm and sunny making a welcome change from the last time’s pouring rain and howling wind.

Once inside the venue, after a trip to the merch stall, the boys abandoned me, heading off to find their spot centre front. Boy Child was hoping for some moshing; the other wean looked slightly less convinced. I took up position two rows off the barrier over to the left of the room. Looking round at the fans who were rapidly filling the venue, they didn’t look like a moshing crowd.

First band on stage were The Scandals from New Jersey. They played a solid fifty minute set and did their job perfectly. Despite sounding at times like a Gaslight Anthem tribute act, they won the crowd over and had them suitably wound into a frenzy for the headliners. Job done!

The Gaslight Anthem didn’t blast onto the stage as I’d expected. They started off very quietly with Have Mercy then blasted into Handwritten, one of my favourites.

Front man, Brian Fallon, explained a few songs in that there would be no encore, they would rather just play straight through and not waste time going off to come back on again. He then went on to say that they based the set around fan requests and songs they felt like playing. Sounds fair enough.

What a set it was! A full two hours and some 28 songs long!!

It didn’t escape my attention that as the evening wore on the crowd in the centre were beginning to mosh. Boy Child would be happy.

By the time The Gaslight Anthem reached the back end of their set, they were playing their harder, faster numbers and the mosh pit was rapidly spreading across the width of the room.

“Mummy Mode” was engaged as I tried to spot Boy Child in the mayhem. Occasional glimpses of him kept me calm enough to return my attention to the stage. A couple of songs before the end, a rather dishevelled older man appeared through the crowd to stand beside me. I’m guessing but he looked to be in his late 50’s/early 60’s and looked as though he had been dragged through a hedge backwards. I suspect he may have “enjoyed” his first and last mosh pit experience. Poor guy!

The Gaslight Anthem ended their epic set with four of their finest numbers (and were joined by the front man from The Scandals for one). Their set ended with The 59 Sound, American Slang, The Backseat and We’re Getting A Divorce, You Keep The Diner.

With minimal fuss they left the stage. Boy Child and the wean appeared out of the crowd. They looked intact then I spotted blood on Boy Child’s face. Nose bleed! He’d tripped and smacked his nose off his friend’s shoulder.

A small spray of blood was splattered across his friend’s white t-shirt.

I knew a white t-shirt to a gig was a bad idea! 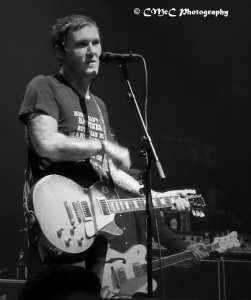 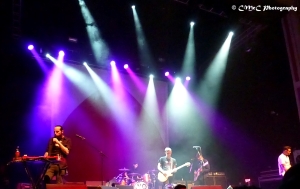