Asking a twelve year old to write their autobiography in hindsight seems a slightly bizarre project for an English class.

Boy Child was tidying up the large walk-in cupboard in his room recently and found some of my old schoolwork. No idea how it got in there but can only presume my mother has evicted it from her house at some point and sent it home with me. 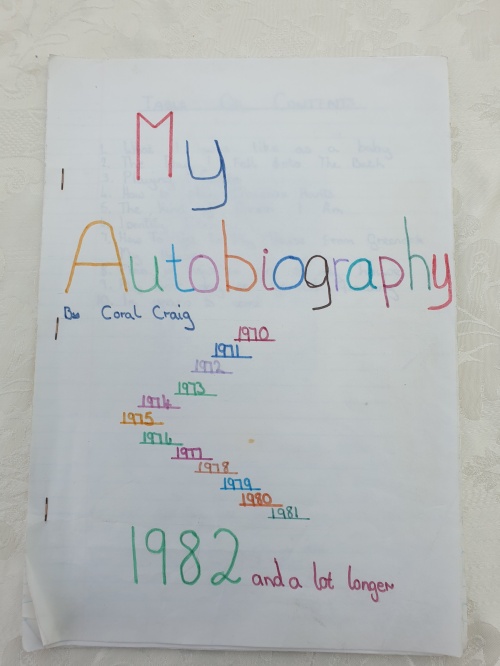 As I re-read those handwritten pages (my handwriting was SO much neater in 1982!) I do actually recall writing some of it.

My English teacher during my first year in high school was a gentleman named Richard Coton. He was in fact the teacher who gave me the best piece of creative writing advice I’ve ever had and it’s stuck with me for all these years. He advised me to write about places I loved and knew well and topics that I was passionate about.

His words came back to me when I started writing the story that evolved into the Silver Lake series of books.

So, how much have I changed since my twelve year old self wrote the first volume of my autobiography?

(Don’t panic – I’ll spare you all of the details!)

There were ten parts to this autobiographical assignment.

Babyhood – ok, please don’t laugh too much at the photo – and having read that section, one thing hasn’t improved over the years. I still don’t sleep great at night!

Playing Cafes – I still clearly remember the game that inspired that section. In reality there were more “meals” served to my long-suffering cousin that night. To this day I’ve no idea how we avoided actually poisoning the poor boy! Happy memories of the summer of 1977…EEK!

The Kind Of Person I Am – well, I’ve grown a whole three inches since I wrote that! Ha Ha. I’m still an avid reader. The model horse collection still lives in the same old shoe box as it did in 1982 only now it resides on a shelf in my parents’ attic. One quote from this “chapter” stuck out.

“So far you might have got the impression I’m out spoken. Well, in a way I am but at the same time I am a very nervous person. My mum says I worry about trivial things.”

Absolutely nothing has changed about that facet of my character. I over think my over thinking! (Blame the INFJ personality type)

The professional ambitions changed slightly. I remember wanting to say that the dream was to become an author but, as a class, we were advised to keep the piece factual/real. The two options I listed were lawyer or physiotherapist. Six years after I wrote that chapter, I went to college to start my physiotherapy degree but it wasn’t to be. Anatomy and Physiology and I have a very poor working relationship and I failed my first year. Maybe I should have written about chasing the dream – I have managed to achieve that!

There’s a map in the autobiography of where I lived at the time. That “slightly” inaccurate road map made me smile.

In Years To Come – the final part of the assignment was to forecast the future. So how accurate were my predictions? In fact there are a few profound observations in there. One of them being

“One thing I’m certain of is that I will not be very far away from home.”

Currently, I live about 100m away from where home was in that map from 1982. In fact, the land my current home is built on was the field I played in as a little girl. Roughly on the red dot

I ended the last section by saying

“Well, I plan on a busy life. On the whole, I don’t think I will change too much over the next five or six years.”

Life is busy and I don’t think I’ve really changed that much over the past thirty-seven years.

So, how did I do on this homework assignment?